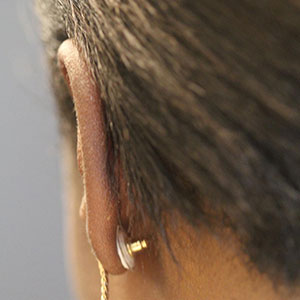 In the future, certain jewelry may require a prescription.

Earrings, rings, and watches could be used to administer contraceptive hormones and other medications, thanks to specially designed backs attached to the items, three researchers write in an article in the May issue of the Journal of Controlled Release.

The jewelry backs would have three layers: The first sticks to the item, the second contains the drug, and the third adheres to the wearer. The resulting “pharmaceutical jewelry” would act like a skin patch and transmit the drug into the body via contact with the skin.

While contraceptive skin patches are already available—as well as patches that help users curb smoking and motion sickness—many might prefer to take their medicine through jewelry, the authors argue. For one, it’s more attractive—and discreet—to wear an earring than a patch. And if the wearer sports the item every day, she would be less likely to forget her daily dose.

“A woman could acquire these drug-loaded earring backs and then use them with various earrings she might want to wear,” said coauthor Mark Prausnitz, a professor at Georgia Institute of Technology’s School of Chemical & Biomolecular Engineering, in a statement. “We think contraceptive jewelry could be appealing and helpful to women all around the world.”

The idea has already been tested on animals. Patches containing the hormone levonorgestrel were mounted on earring backs applied to the skin of hairless rats. While the rats wore the backs only 16 hours a day—as most people remove their jewelry before going to bed—the test subjects still absorbed the necessary amounts of hormone.

The technique has yet to be tried on humans. But if jewelry is ever used to deliver birth control medication, the piece would need to be refilled periodically—probably weekly.

Other types of medications might also work in jewelry, Prausnitz said, but not all.

“There will always be a limitation that the drug has to be effective with a low enough dose to fit into the limited space of a patch,” he added. “It also should be a drug that would benefit from continuous delivery from a patch and that is administered to a patient population interested in using pharmaceutical jewelry.”

Still, even if the new delivery method works, it’s not clear whether consumers will actually want a pill in a piece.

“We would have to make sure that this contraceptive jewelry concept is something that women would actually want and use,” said Prausnitz.