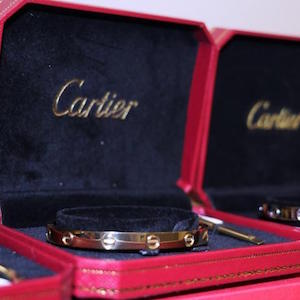 A North Carolina pastor has been arrested for allegedly possessing more than 3,200 counterfeit Cartier bracelets that have an estimated value of $24.4 million.

JianGang “Frank” Lan of Chapel Hill has been charged with felony criminal use of a counterfeit trademark, according to a release from the North Carolina Secretary of State’s office.

Secretary of State Elaine Marshall told local channel CBS 17 that the arrest was linked to the seizure last month of 180 counterfeit Cartier bracelets in New Orleans by agents of the U.S. Customs and Border Protection (CBP).

The bracelets had been shipped from Hong Kong, a known hub for counterfeits, the CBP said. The agents found the bracelets to be of “low quality” and quickly determined they were fakes, it added.

Acting on information from that case, the North Carolina Anti-Counterfeit Trademark Task Force discovered the Cartier knockoffs as well as other counterfeits stored at the Chapel Hill church where Lan works. Lan is listed as associate pastor on the church’s website, the release says—though the church’s site was offline at press time.

It is not clear why Lan allegedly possessed so many bracelets, and what he planned to do with them. A spokesperson from the North Carolina Secretary of State’s office did not return a request for comment.

Lan could not be reached for comment. The release says he is currently being held in Orange County, N.C., jail on a $25,000 bond.

This is the largest single seizure since the North Carolina Anti-Counterfeit Trademark Task Force was established in 2004. The estimated retail value, $24.4 million, reflects the items’ value if they were genuine.

Marshall said in a statement that the arrest “is a major win for consumers and retailers. Counterfeiters peddling fakes of an iconic brand such as Cartier are doing damage not only to that company’s brand, but to legitimate merchants and to consumer trust in brand quality.”