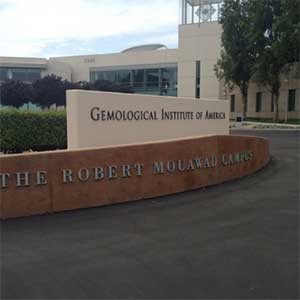 It’s that time of year again. The nexus of the jewelry industry shifts from New York City to the West (dare I say best?!) Coast for one week every October, as Southern California’s jewelry movers and shakers gather for networking events, award ceremonies, and shows designed to celebrate the region’s thriving jewelry community. This year, we have the added bonus of the GIA 2018 International Symposium, a once-every-seven-or-eight-years event that brings together a who’s who of the trade. Here’s what you need to know about this week’s festivities.

On Saturday night, I attended the 24 Karat Club of Southern California’s annual schmooze fest at the Beverly Hills Hotel, where JCK publisher Mark Smelzer and I took our gazillionth “Mr. and Mrs. JCK” step-and-repeat photo before the dinner and awards ceremony kicked off.

The evening’s accomplished honorees—Thomas J. Blumenthal of Gearys Beverly Hills and David Marcus of Marcus Diamonds, both of whom received the Excellence in Service Award, and Rising Star Award winner Dave Bindra of B&B Fine Gems—all made heartfelt remarks praising their mentors and colleagues, but it was Bindra, and his hilarious father, Ruben, who stole the show.

“Dave was a sharp guy, but he knew nothing about the business—I mean absolutely nothing,” Ruben said in his introductory remarks. “I still remember his first sale at Tucson—a parcel of pink sapphires…Mr. Dave had sold this thing at a pretty decent loss, and he was quite excited about it.”

The gentle roasting continued, but it was evident that the Bindra family—purveyors of some of the finest gemstones around—have a deep and abiding love and respect for each other and for the jewelry business.

“Thank you for not only giving me a career, but for giving me a purpose,” Dave said in his acceptance speech, before leading the audience in a toast to the trade. It was a perfect cap to an always-fun evening of revelry. Cheers on your well-deserved award, Dave! (Though, to be fair, we think your star rose a while ago!)

Maestro Roger Nierenberg lead an ensemble of musicians from the San Diego Symphony Orchestra through a number of musical compositions meant to demonstrate leadership and collaboration skills. After issuing a series of esoteric commands to the violinists regarding how to play their bows, for example, the players performed as if they were one.

“Every bow is like a carbon copy; the execution is the same,” Nierenberg said. “How? Really good decision-making in real time.”

I’m still trying to figure out how to apply the lessons to my own team at JCK, but the music was beautiful, and Nierenberg was a lively, engaging speaker.

The last time GIA staged an international gemological symposium was in 2011. That may explain why this year’s sold-out event has drawn more than 750 attendees from 36 countries. The theme—“New Challenges. Creating Opportunities”—certainly sounds promising. I’m especially looking forward to Tuesday’s closing session, titled “Futurescape Forum.” Watch this space next week for a recap of the highlights.

On Oct. 9 and 10, the first West Coast edition of the Metal + Smith show is coming to Los Angeles. I don’t get home from Carlsbad until late Tuesday night, so that leaves Wednesday for me to peruse the aisles of the #notatradeshow. I’m looking forward to seeing the work of L.A. jeweler M. Spalten and Cedar Rapids, Iowa–based Leigh Maxwell and to discovering some designers new to the scene. After that, I’m heading home for a nice long nap!