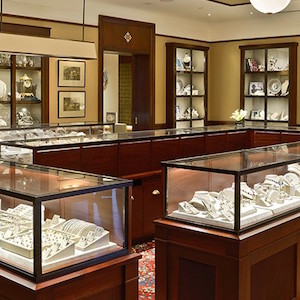 TD Bank has given Betteridge Jewelers a $20 million asset-backed revolving line of credit that will be used to fuel the four-store chain’s growth.

Based in Greenwich, Conn., Betteridge has a flagship there, as well as stores in Palm Beach, Fla., and Aspen and Vail, Colo.

Chief operating officer Win Betteridge says the 120-year retailer hopes to beef up manufacturing of the pieces it offers.

“The common wisdom is to outsource production,” he says. “We have found by doing things efficiently and in-house and by remaking the most popular designs that we can offer customers some really spectacular classically inspired pieces at a better value than they can find elsewhere.”

Of course, owning stock is not cheap, which is part of the reason for the credit line.

“You go into department stores, it is all on consignment. It is extremely capital intensive to own your own jewelry, especially if it tends to be diamond focused.”

He also thinks that the brand might start selling pieces wholesale down the line.

It’s also possible the retailer might open more stores or buy existing ones, if the right opportunity comes along, he adds.

He still remains a big believer in brick-and-mortar.

“That’s not to say that e-commerce doesn’t play an important role in the business. Some of the best customer leads we get are through the website. But our customers still want to deal with one of our salespeople. We are not in a faceless business. With the kind of higher-end jewelry that we carry, [online] is not how they make purchases.”

He says the retailer eventually decided to strike a deal with TD after an “exhaustive” look of at least two dozen banks.

“TD really stood out to us because they are literally across the street from us in Greenwich,” he says. “We see the head of the asset-backed lending department around the neighborhood. We get a real kind of traditional sense from them that you might get from a community bank rather than from a huge global player.”

In 2014, JCK chronicled how Win Betteridge proposed to his girlfriend via an ad for his store.