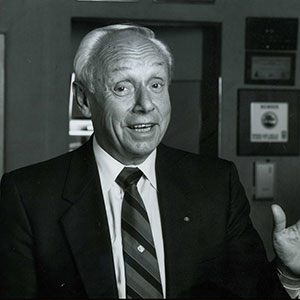 Orley Solomon, who worked for Ben Bridge Jeweler for five decades and became a legend at both the retailer and the American Gem Society (AGS), died on Aug. 2 at age 94.

In 1998, the AGS awarded Solomon (pictured) with the Robert M. Shipley Award, its highest honor. Known for his personable manner and infectious good cheer, Solomon was a frequent speaker at AGS and industry events, often livening up his talks with magic tricks. He also served as past president for the AGS’ Northwest chapter and a member of the AGS board.

“Orley was an incredible person and a mentor to so many of us,” says Ben Bridge president Lisa Bridge. “As our first non-[family] manager and longtime hiring and training vice president, he set Ben Bridge on a course of growth.”

Solomon started with Ben Bridge in 1960, eventually becoming its senior vice president, overseeing training and personnel. In an interview with The Centurion, Lisa Bridge recalled how Solomon changed the company’s hiring philosophy.

“We changed from hiring people with a gemological background to hiring people who love people and who love jewelry,” she said. “[He] always said you can teach everything else, but you can’t teach someone to be a nice person.”

In 1999, Solomon said in a speech covered by Professional Jeweler that salespeople needed to be “fearless” and “leave their comfort zones.” In the days before widespread adoption of the internet, he advised salespeople to spend 15 to 30 minutes every day learning about their customers’ professions. For instance, when he found out a member of his tennis club was a vascular surgeon, he researched a new surgical technique in the newspaper—and forged a friendship with the man when they talked about it.

“At the age of 76 he’s still active at our company, as one of the vice presidents and the premier trainer,” he said. “I mean he is such a good trainer, and not only in gemology but in salesmanship and everything. He’s just fantastic.”

Solomon retired from the company in 2010. In 2009, he distilled his lifetime of sales tips into a book: Selling from A to Z.

Among the first pieces of advice: “Thou shalt have fun.”

He is survived by his wife of 68 years, Arlene; two children; and three grandchildren.