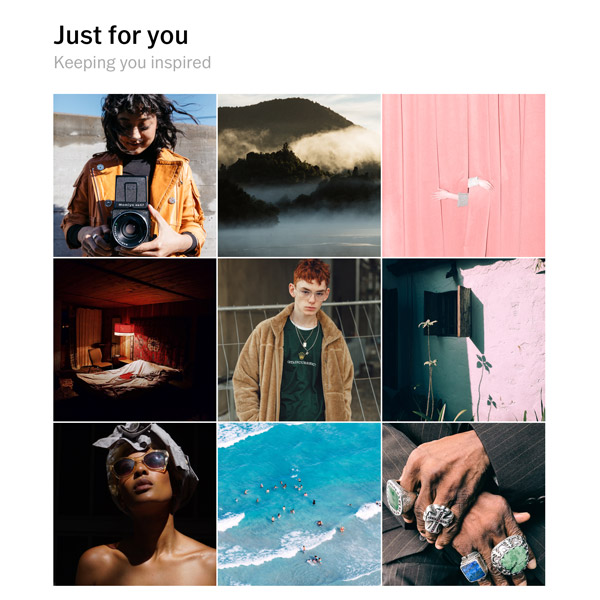 If social media platforms like Instagram have you feeling sick of the “compare culture” they inspire, then some time on VSCO may be for you.

For those not familiar with VSCO, it’s a pretty cool photo editing app that also has a social media–esque component to it with its community of users. Users edit their photos with the app’s tools, either for use on other social media sites, or to add to their profiles on VSCO (or both).

The app’s tools are pretty solid—I used to edit my photos with VSCO all the time, though I managed to completely bypass its photo-centric community, opting instead to download my images to my phone—and post on Instagram.

So if you, like me, didn’t really consider VSCO a member of the social media bunch, that might be because it’s more the anti–social media. “At VSCO, what we hear as we talk to our community is that, for so many of the other platforms, it’s about how they want the world to see them on those platforms—on VSCO, it’s a safe space for them to be who they are,” said CEO Joel Flory, appearing on Yahoo Finance’s The Final Round live web show.

Instagram may be fidgeting with hiding like counts, but for VSCO, that’s nothing new. “From the beginning, we’ve had no likes or comments; there’s been no way to publicly see the number of followers or the popularity of someone,” said Flory. “As we’ve talked to our community in a recent study that we put out, over 77% of them are doing it for themselves. It’s not about what others think about them.”

But if a tree falls in the woods and there’s no one there to hear it, does it make a sound? Or, more precisely, does it make sense for someone like a jewelry designer to share content with a community that can’t interact?

In the case of VSCO, think of it less like a marketing tool, and more like an adult coloring book. It’s “me time” in an app. You can create to your heart’s content, and while others won’t be able to like or comment, they can still see it. And sometimes, that’s enough.

VSCO’s CEO talked a lot about Gen Z during his time on The Final Round, and apps like this one may be the key to reaching them. Or at least, a small part in doing so.

Use this opportunity to take gorgeous photos of your creation—against vivacious backgrounds, modeled with expressive styling, or do loupe-style shots of the gemstones up close. Play with the app’s editing features—there are no rules here, so you can go nuts. You aren’t selling anything here, so if you want to give your ring a purple hazy overlay, why not do it? If you want to create a Warhol-style layout, go for it. It’s just another layer of creativity to slather on top of your already-amazing artistic abilities, and it may be what catches the eye of other users in the community.

As a business, it makes sense to want to find the most direct route to a sale. But if you want to get a little lost along the way, and maybe, just possibly, pick up a few new friends, why not have a little fun playing with VSCO?