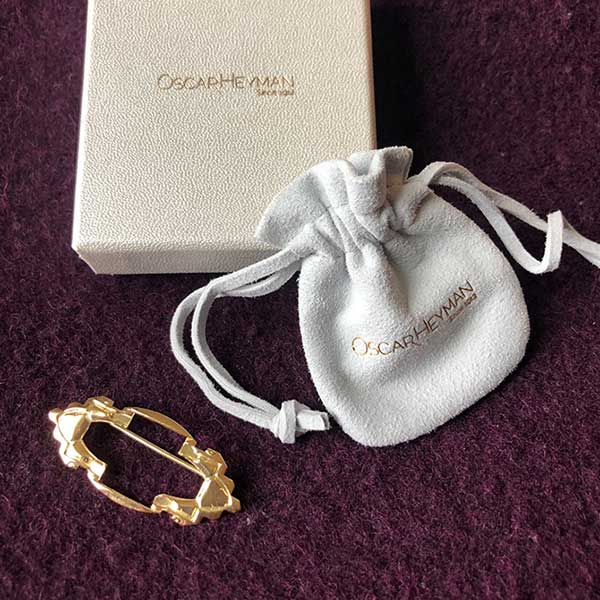 On Thursday, I had the pleasure of spending two hours at the Oscar Heyman workshop on Manhattan’s Madison Avenue, learning how to make a simple 18k yellow gold pin.

It was not my first time in a jewelry-making arena. I’ve toured small ateliers in Los Angeles that consist of just a couple benches as well as enormous factories in Mumbai, where jewelry bound for America’s volume retailers is produced. But I had never actually participated in the act of making jewelry. The process of how molten metal transforms into a well-crafted, perfectly proportioned piece of jewelry remained, essentially, a mystery.

Until, that is, Tom Heyman, a third-generation member of the family business founded by brothers Oscar and Nathan Heyman in 1912, entrusted me with a torch. 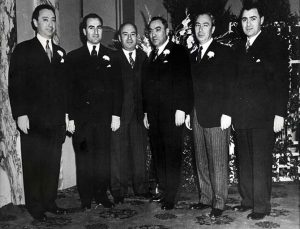 Here are just a few of the things I learned during my master class at Oscar Heyman.

Jewelry-making is at once stealthy and loud.

Since 1969, Oscar Heyman has occupied two floors at 501 Madison Ave. (the same building where jewelers David Yurman, Jose Hess, and Kurt Wayne once worked). The floor where visitors enter houses the foyer, conference rooms, the administrative team, the stone-buying room, and file cabinets containing some 180,000 historic designs stored on yellowing cards. It was renovated about five years ago, when all the dark wood paneling was removed in favor of a lighter, more modern color scheme. 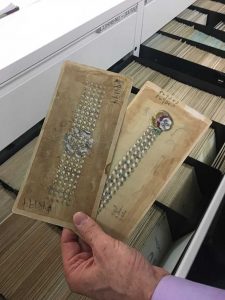 Tom Heyman holding one of the 180,000 designs stored in Oscar Heyman’s archives.

The first floor is so refined and elegant, you’d never guess there’s a full-fledged jewelry and tool-and-die workshop upstairs full of decades-old machines, including one date-stamped 1894! “We have CAD-CAM and laser welding machines, but a lot of the jewelry is still done the way it’s always been done,” Tom said. 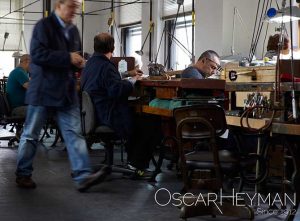 The workshop hums with the sounds of jewelers alloying, rolling, stamping, hammering, drilling, and polishing metal. It’s not quite ear-splitting, but it certainly is loud, as befitting a bona fide factory. In 2017, Oscar Heyman was recognized with the “Made in NY” mark of distinction, a program administered by the New York City Economic Development Corp. And it’s on the second floor that all of the magic happens.

The first step in the jewelry-making process is melting the metal. Tom had set aside a few pieces of scrap gold that I could use to make my piece. We gathered in the small furnace room, where Ray Pesantes, the shop’s toolmaker, handed me a torch with a hot blue flame that he’d set to about 2,000 degrees F.

(Oscar Heyman works exclusively in platinum and, to a lesser extent, 18k yellow gold. “We didn’t work in gold at all until WWII,” Tom said. “My grandfather Harry thought gold was inappropriate for fine jewelry.”)

I was instructed to keep the tip of the flame about 10 inches from the metal in the dish and wave it back and forth until the yellow hunks of metal liquefied into a silvery-looking gel. I passed the flame back to Ray, who poured the molten metal into a cast iron form, where it cooled. 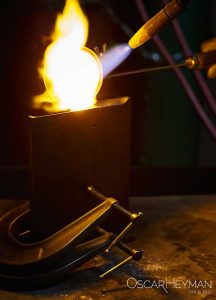 Once it reconstituted, Ray removed the gold hunk, which looked like an oversize domino, and walked it over to “the pickle” (literally a Crock Pot full of sulfuric acid). He dropped it in and left it there for two or three minutes, as the acid removed impurities and oxidation. Once he removed it, my domino of gold was ready to be milled.

Jewelry-making is not for wimps.

The scariest machine in the room is the rolling mill, which transforms thick plates of gold into thinner plates or into wire that are easier to manipulate at the jeweler’s bench. It’s a big motorized machine (Oscar Heyman has a couple manually operated rolling mills, too), but all the action happens between two round rollers that are capable of exerting enough pressure to flatten metal. (Yikes!)

With each successive roll, the idea is to tighten the wheels so the gold that you feed into one side of the rollers emerges thinner and longer on the other side. Our goal was to get my oversize domino down to 0.05 of an inch.

“This machine will not stop no matter what’s in it,” Peter Olving, the shop manager, warned me. “Since I saw a pair of stainless steel tweezers get mangled, it’s one of the scariest ones to me. It does not stop.”

I took my turn at the mill and gingerly fed it my gold domino. You’d have to be really careless to put your fingers (and, indeed, your whole hand and wrist) at risk, but it was a potent reminder of the dangers that lurk inside a factory.

“Our torches are awfully hot,” Olving said. “Every jeweler here has scars. Setters’ tools are sharp pieces of steel with wooden handles. They put pressure on the handle. If a hand’s in the wrong place, it’ll go right through until it hits the bone. It’s just part of the trade.”

Once milled, my gold domino looked more like a thick gold Band-Aid. I was taught how to anneal the metal, which required placing it beneath a flame until it burned a bright cherry red—thus loosening its atomic bonds, increasing its ductility, and reducing its hardness. 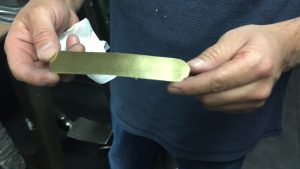 Then back into the pickle it went. After repeating the process a few times, my hunk of gold was ready to be stamped using tools and dies that have been around since 1912, when Nathan Heyman took the knowledge he’d picked up at a tool-and-die shop in the city and applied it to his and his brother’s burgeoning company. (One closet is packed, floor to ceiling, with boxes containing sets of decades-old dies.) 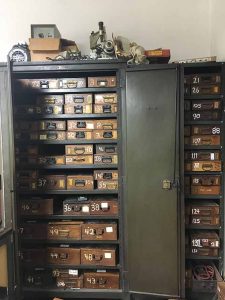 The closet of tools and dies at Oscar Heyman

I was invited to sit at the stamping machine, which is marshaled into action when you place your foot on a wide petal and give it a swift kick. Think of it like using a cookie cutter to make cookies from dough, Tom explained, as we placed my gold Band-Aid onto the machine. The goal was to align the stamp perfectly and then punch out a wide, cross-like section in the middle of my gold Band-Aid, leaving a delicate frame of gold that could then be stamped with a motif.

“Because of the rigidness of the die and the thickness of it, it helps not deform the metal when it punches through,” Tom explained. 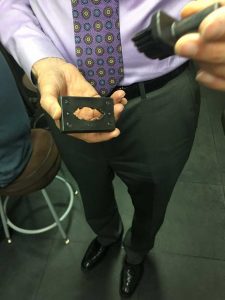 You can see the outline of my pin in the tools Tom Heyman is holding.

All of these steps were performed numerous times (by Ray) before my pin took shape. And though it looked recognizable as a piece of jewelry, it wasn’t quite there yet. 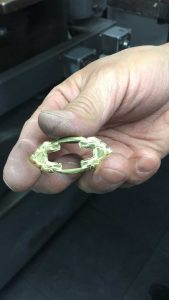 My 18k gold pin after the stamping stage. Now on to the polishing room!

Thrumming and ajoure work separate the great jewelers from the mediocre ones.

The polishing stage made all the difference. A polisher named Hector demonstrated how to transform a dull piece of metal into a precious shiny object. I sat at his bench and attempted to do the same thing, but I lacked the dexterity and the expertise to know how much pressure to apply to the polishing wheel. Once Hector took over, it took but a few minutes to turn my pin into something I’d truly want to wear.

This is when I learned about thrumming and cutting ajoures, two terms I’d never heard before (to Tom’s great surprise). He explained that the former relies on linen threads to perform the detail-oriented polishing that separates the fine jewelers from the mediocre ones, because it ensures that every nook and cranny of the jewel—even those parts no one can see—shines (unlike standard tumble polishing).

Ajoures, on the other hand, are drill holes set into the back of a piece of gem-set jewelry. “If you’re really low-end jewelry, you don’t even drill it all the way through, the setter just power-sets the diamonds,” Tom explained. “If you’re a medium jeweler, you drill it all the way through, and there’s a hole on the back. And if you’re really high-end, you make ajoures, which means you remove all the metal that you can and you leave these really thin wires, so there’s a lot of air around the backside of the diamond. That lets a little more light enter and bounce around and come through the back.”

Sourcing the finest gems means going straight to the source.

At the shop, I was introduced to Tom’s older brother, Lewis, the firm’s stone buyer. On Friday, he left for a two-week trip to Sri Lanka, Bangkok, and Myanmar, where he’ll be shopping for “groceries and treasures,” Tom explained. (Groceries are the repeatable goods, while the treasures are one-of-a-kind stones, such as pigeon’s-blood Burma rubies.) 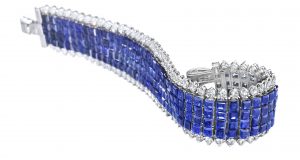 “Our mission is to showcase the finest gems in the world,” Tom said. “We make, clean, simple jewelry—the gem should be the star. Thirty years from today, you’ll still love it. And 40 years from now, your kids won’t want to liquidate it, they’ll fight over it.”

Oscar Heyman’s doors are open to retailers and clients.

Any retailer who’d like to experience the master class at Oscar Heyman, and walk away with a shiny gold pin like the one I helped make, is welcome. (Tom had someone in the shop add a stick pin to the back and had the finished piece messengered to me on Friday. I’m in Nashville this week for the American Gem Society’s annual Conclave and will wear it with pride!)

“We love it when retailers bring clients,” Tom said. “They might come with a client who wants to design something, so we’d bring a designer in. We tailor the tour to whatever the retailer’s agenda is.”

“We still feel there’s a tremendous opportunity in America with American retailers for American-made jewelry,” Tom concluded. “There are always going to be wealthy clients that want fine jewelry. And there are always going to be events for fine jewelry: birthdays, promotions, grandchildren, life events that you want to celebrate. If you remove jewelry from the equation, the world is more drab.”

Amen! And nothing hammers (!) that point home better than the visceral experience of making a piece of jewelry. If you’re at Conclave this week, come see the proof for yourself.

Top: The 18k yellow gold pin I made at Oscar Heyman! Tom Heyman messengered the finished piece to me on Friday. I’ll be wearing it this week at Conclave (photo by Julia Gomelsky).