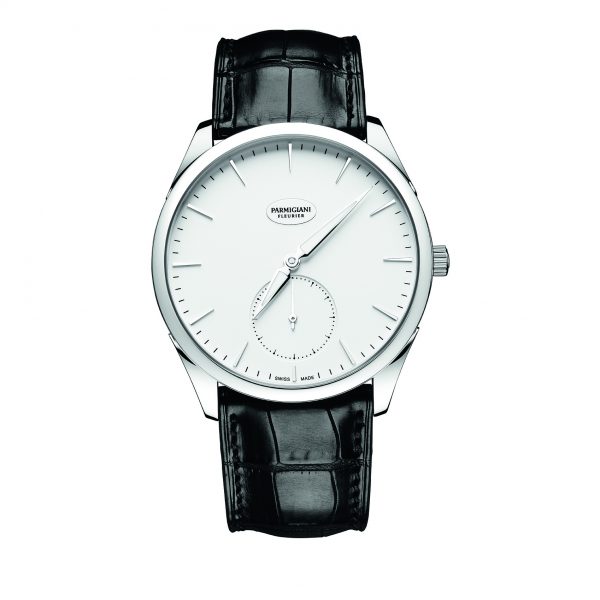 A week ago, I hit the ground running in Geneva—literally. In town for the 27th annual Salon International de la Haute Horlogerie (SIHH), I arrived around 11 a.m. last Monday on a red-eye flight from Newark International Airport (with a layover in Dublin), sprinted to my hotel, freshened up, and raced out the door to the Palexpo convention center, anxious to catch the second half of the day’s press presentations.

After 13 years of attending SIHH, which is dominated by Richemont-owned brands such as Cartier, IWC Schaffhausen, and Jaeger-LeCoultre, I have ambivalent feelings about the show (not coincidentally, I feel the same about Baselworld). I adore its plush environment. I gorge myself on its complimentary foie gras and champagne. And I marvel at its sophisticated polyglot vibe. But the schedule is relentless. (I say this with full knowledge of how little sympathy a deluxe business trip to Geneva deserves.)

This year proved especially challenging because the show hosted 30 exhibitors, up from its traditional 16 to 18 brands. For the second year in a row, SIHH has welcomed independent watchmakers, such as H. Moser & Cie., HYT, and Ressence, and while I’m thrilled for the opportunity to get to know these talented, creative thinkers, time at the show is now even tighter.

Happily, I was able to sit down with all but three of the brands that exhibited this year. Blue dials and tourbillon movements were everywhere, but that’s nothing new. Here are the 2017 trends that impressed me.

Chiming mechanisms are the complication du jour. Vacheron Constantin, Greubel Forsey, and Jaeger-LeCoultre all introduced versions of the ultimate chiming watch, a grande sonnerie. Often described as watchmaking’s Holy Grail, the intricate complication strikes on the quarter hour. Beyond the sheer number of parts a grande sonnerie requires (Greubel Forsey’s contains no fewer than 935), creating a pleasing sound is considered extremely difficult. Keep your ears open this spring!

Don’t be fooled by the Swiss watch industry’s obsession with the past. The trade is laser-focused on the future, particularly when it comes to experimental types like Richard Mille and Roger Dubuis and even more classic types like Panerai.

All three brands brought out models featuring far-out materials—and I’m not just talking about grade 5 titanium and PVD coating. In Dubuis’ case, the material is cobalt chrome, a high-performance alloy borrowed from the medical and aeronautical industries and put to use on the new Excalibur Quatuor Cobalt MicroMelt. In Mille’s case, it’s graphene, a form of carbon that the brand describes as “revolutionary nanomaterial six times lighter than steel but 200 times more resistant”—see it on the RM 50-03 McLaren F1 at the bottom of this post. While Panerai’s fascinating contribution is a wristwatch, the LAB-ID, that comes with a 50-year warranty (!) owing to its 21st-century materials, including a carbotech case and self-lubricating plates and bridges.

When a brand that’s spent the past 15 years associating itself with the tag line “Engineered for men” dedicates its entire SIHH presentation to a redesigned collection aimed at women, as IWC Schaffhausen did last week when it unveiled the new look of its Da Vinci line, you know we’re undergoing a shift in the zeitgeist. Still considered an untapped category for the Swiss, women’s watches are now being embraced by traditionally masculine brands, from A. Lange & Söhne to Urwerk. This isn’t exactly news—I’ve covered Switzerland’s emphasis on ladies’ timepieces plenty of times, most recently here and here—but it impressed me this year nonetheless. (Having spent this past Saturday with 750,000 like-minded people at the Women’s March in downtown Los Angeles, I’m especially happy to be talking about anything that might appeal to my fellow nasty women!)

SIHH 2017 saw an interesting split among brands when it came to pricing strategies. One segment went the entry-price route: Parmigiani, Jaeger-LeCoultre, and Cartier all introduced new, relatively inexpensive styles intended to appeal to a wider customer base, especially millennials, who remain an unrequited love for the Swiss. Parmigiani’s new Tonda 1950 Steel, which the brand is describing as an “ultrathin everyday watch,” clocks in at $9,900, a new entry for the brand. JLC’s new date-only edition of the Master Control opens at 4,900 euros (about $5,260). And Cartier’s sexy relaunch of its 1980s Panthère ladies’ watch line starts at $4,000 in steel.

By contrast, another segment of brands at SIHH is heading for the peaks of Swiss watchmaking, where the air is considerably more rarefied (see the Greubel Forsey Grande Sonnerie mentioned above). A. Lange & Söhne’s much-lauded Tourbograph Perpetual “Pour le Mérite” carries a price tag of 480,000 euros. Roger Dubuis’ Excalibur Spider Pirelli, which comes on a rubber strap made from actual Formula One–winning tires, retails for 280,000 Swiss francs ($280,300). But, as per usual, Richard Mille bests them all with the RM 50-03 McLaren F1, an ultralight tourbillon split seconds chronograph priced at $980,000. Mille is a charming guy, a great interview, and enormously successful, so far be it from me to question his judgment (but geez!).