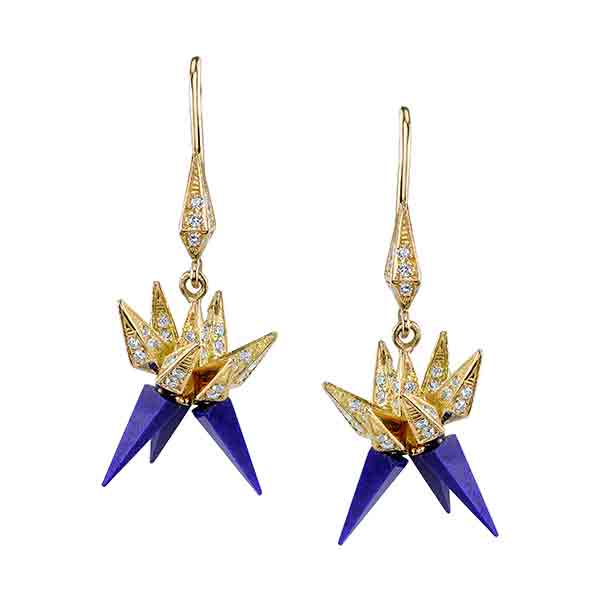 Rather than predict how the gemstone trade will fare over the next decade, we decided to focus on the imminent future: According to our crystal ball, these are the five things every gem buyer should know in the run-up to next month’s Tucson gem shows.

The Slam Dunk: Classic Blue, Pantone’s 2020 Color of the Year

It may be tempting to discount the importance of Pantone’s much-hyped Color of the Year announcement, but all signs suggest the 2020 color, Classic Blue, will be influential at the sales counter.

“It’s very relevant,” says Dave Bindra of Los Angeles’ B&B Fine Gems. “Blue sapphires, blue spinels, even deeper blue aquamarines—are all tones people are gravitating toward. There’s been a shift toward classic consumption. And so many people are looking for alternatives to diamonds—blue sapphire is a safe entry into the world of colored gemstones.”

The beauty of Classic Blue is how many gems qualify for the label. “On the higher end, people will be focusing on sapphires,” says gem dealer and influencer Hannah Becker, aka @diamondoodles. “But kyanite and tanzanite will get a lot of play because they both have a more accessible price point, especially kyanite. And they have that true iconic gemmy blue.”

And let’s not forget lapis lazuli, a rich, pyrite-flecked blue beloved by designers for its low price point and high profile.

Spinel and opal are designer darlings, but that’s hardly news. Instead, look to garnet for a fresh take on color this year, as buyers discover what lovers of January’s birthstone have long known: As a species, garnet offers a startling degree of variety.

From the red pyrope or almandine garnets that that were a common feature of Georgian and Victorian jewelry to the utterly uncommon, electric-hued, orangey-red spessartite, the gem is poised to rise in popularity for reasons that have everything to do with the breadth of its color range, as well as its relative affordability (though rarer varieties, such as the grass-green grossular garnet known as tsavorite, are priced accordingly).

“It has a high level of transparency, occurs in a variety of different colors, and it’s really durable,” Bindra says. “We sell a lot of tsavorite. It’s natural, free of treatment, whereas emeralds are oiled, a little brittle, not so easy to work with on a daily basis.”

But that’s not all. In addition to tsavorite, sought-after varieties include purple grape garnet from a deposit in Mozambique and Malaya garnet, a rose-to-peach variety also found in Africa. (“They mimic the tone and range of a padparadscha,” Bindra says.)

The best part about using garnets is how easy it is to surprise people unfamiliar with their range: “Telling non-jewelry industry ‘civilians’ that garnet comes in colors other than red blows their mind,” Becker says. “Especially if they were born in January.”

Garnet is poised to stand out in the new year for another reason: It lends itself to the color palette we saw on the fall runways.

“The fall colors—the oranges, reds, greens—are big going into winter and will lighten and soften for spring, because no matter what your skin and hair type is, one of those will look good on you,” says Erica Silverglide, aka @gemologygeek.

Becker echoed that prediction. “Padparadscha has almost become more a color than a material,” she says, referring to the rare pinkish-orange form of sapphire, named after the Sinhalese word for lotus blossom.

She predicted we’d see the color scheme play out in strong sales of imperial topaz at the high end and, at the low end, carnelian (“It used to be seen as a granddad stone in a signet ring and not as a gemmy/beautiful stone that can be sliced or polished,” Becker says).

If we had to name the theme of the next decade and beyond across all consumer categories, there’s no question it would be sustainability. In short, are the products we buy and sell depleting natural resources or can they be replenished?

“The tenor of the whole show is going to be a sustainable supply chain, as has been the case for two to three years,” says Doug Hucker, chief executive officer of the American Gem Trade Association, whose GemFair runs at the Tucson Convention Center Feb. 4–9, 2020.

What the gem trade often describes as sustainability, however, is really some combination of transparency, ethical mining, and responsible sourcing—all topics poised to become part of every (savvy) gem dealer’s playbook in the near future, even if end customers haven’t quite caught on.

“The trade is much more conscientious about this than the end user,” Bindra says. “With the advent of responsible sourcing and pipeline transparency, there’s a lot of fear in our business, but I don’t think end users are there yet. That’s why we need to do our due diligence—to get ahead of the curve. So when that interest comes to us, we’re ready.”

The Other Big Topic: Country of Origin

More interesting than the ubiquity of conversations around sustainability is the rising importance of country-of-origin designation. For example, when you stop at the GemFair to admire that Classic Blue sapphire, be prepared to ask whether it’s from Madagascar, Sri Lanka, Burma, or Kashmir—the answer will have great implications on the stone’s value.

So great is the interest in this topic that at least one country is rallying around its chief gemstone export to create a brand: “The Colombians are working very aggressively to brand Colombian emeralds,” says Hucker. “They want to be the Juan Valdez of emeralds.”

Stay tuned for more on this front after we return from Tucson. See you there!?