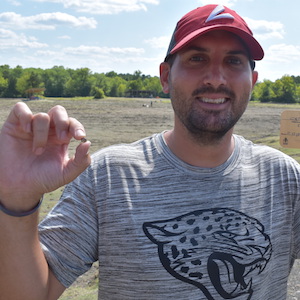 On July 24, Josh Lanik (pictured), a 36-year-old schoolteacher from Hebron, Neb., found a brandy-colored gem weighing more than 2 cts. at the Crater of Diamonds State Park in Murfreesboro, Ark.

Out of the 296 diamonds unearthed this year at the park, it is the largest to be found so far.

The Crater of Diamonds is the only park in the world that lets the general public search for diamonds. Among the notable finds since its opening in 1972: the Strawn-Wagner, a 1.09 ct. D flawless, and the Esparanza, an 8.52 carater that ended up being cut live by a local jeweler.

Lanik said in a statement that he found the gem on the southeast edge of the park’s search area, after just two hours of looking.

“I was walking through an area where it looked like a lot of water had washed when I saw it,” he said. “It was blatantly obvious there was something different about it. I saw the shine, and when I picked it up and rolled it in my hand, I noticed there weren’t any sharp edges.”

He showed it to his wife and dropped it into a brown paper sack with several other minerals. When he brought it to the park’s Diamond Discovery Center, a park employee put it into a pill bottle and brought it in the office for a closer look.

“She wouldn’t tell us whether it was a diamond, but we were pretty sure from her reaction that it was,” he said.

Park interpreter Waymon Cox said in the statement that “Mr. Lanik’s gem is about the size of a jelly bean and has a dark brown color, similar to brandy. It has a beautiful natural pear shape and smooth, curved facets that give the gem a metallic shine.”

He said that recent heavy rains in the area may have contributed to the find.

“About 14 inches of rain fell at the park on July 16,” he said. “In the days after the rainfall, park staff registered numerous diamonds found right on the surface of the search area, including two weighing over 1 carat.”

Lanik named the gem the Lanik Family Diamond to remember his experience visiting the park with his family. He said he plans to keep the gem, at least for now.

JCK editor-in-chief Victoria Gomelsky wrote about her experience at Crater of Diamonds here.

(Image courtesy of the Crater of Diamonds State Park)